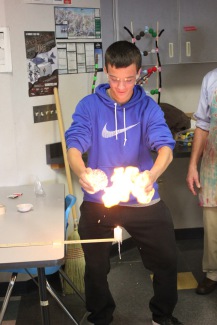 WHAT IS STEM EDUCATION? It’s an interdisciplinary approach to learning where rigorous academic concepts are coupled with real-world lessons as students apply Science, Technology, Engineering, and Mathematics (STEM) in contexts that make connections between school, community, work, and the global enterprise enabling the development of STEM literacy and with it the ability to compete in the new economy.

STEM isn’t just for scientists and engineers. The creativity and critical thinking skills that come with a foundation in STEM education are in high demand, for all kinds of jobs, across our state.

It’s simple: in the 21st century, STEM education opens doors for every student to succeed.

Today, the Washington state economy is rooted in STEM. In the last 10 years, growth in STEM jobs has been three times greater than non-STEM jobs. Washington ranks #1 in the nation in the concentration of STEM jobs.

BUT...There are currently 25,000 unfilled jobs in Washington due to a lack of qualified candidates. Eighty percent of those jobs are in high-demand health care and STEM fields, such as computer science and engineering. Today, while Washington ranks fourth in the country in technology-based corporations, we fall to 46th when it comes to participation in science and engineering graduate programs. Only 48% of Washington’s fourth-graders and 42% of eighth-graders scored proficient or above in math on the National Assessment of Educational Progress.

Click on the image above to learn more about why STEM is important to Washington and Sedro-Woolley students.

See Yourself in Me -

A Spotlight on Women in STEM

The Spotlight on Women in STEM features a series of inspiring videos along with interactive classroom materials that are designed to showcase the tremendous opportunities for women in four of our highest demand, living wage industries in Northwest Washington – IT, Halth Care, Engineering and Construction. The target audience is young women in middle and high school just starting to discover their interests.

Click here to see all of the videos and classroom materials produced by the NW Washington STEM Network. Congresswoman Suzan DelBene kicked off the second annual Spotlight on Women in STEM that attracted nearly 400 area junior and high school students from all Skagit schools. She shared her journey in STEM fields. “As someone who made a career in STEM before coming to Congress, I know how important it is for young women to develop the skills to compete in a 21st century economy,” she said. “Understanding how things work will benefit you wherever you go! I want to encourage you to pursue your passion.”